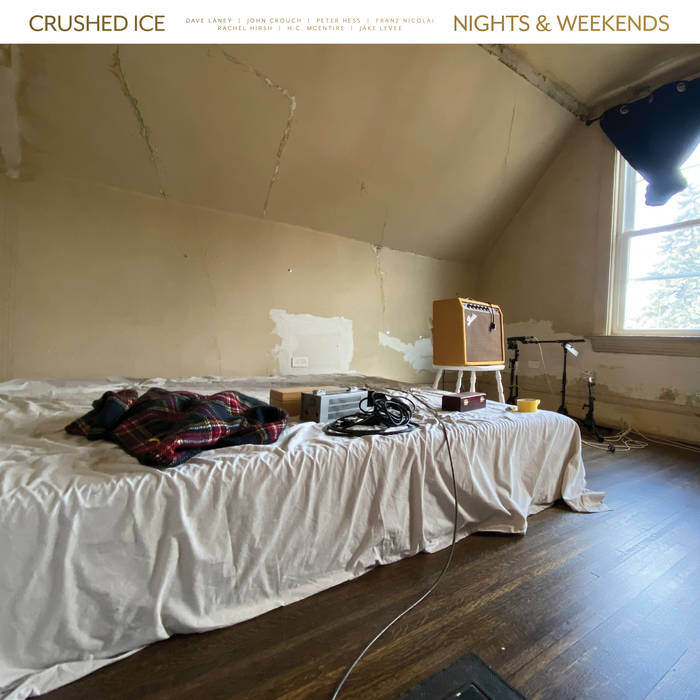 Crushed Ice's Nights and Weekends could equally be titled Pandemic Puzzle – A Great Big Wonderful World. As the globe went into lockdown in early 2020, Dave Laney (Milemarker, Challenger, Auxes) reached out to a handful of long time friends and collaborators, pitching the idea of an Exquisite Corpse-style recording project with the promise that all involved could get as weird as needed – and they all needed to get weird.

The band was never in the same room at the same time. Each member was given full creative control and recorded their parts in home studios during the ensuing nights and weekends. Ever-changing rhythms and patterns continuously metamorphosed the songs until the pumpkin transformed into the carriage before us today.

Touching on themes of trauma, cynicism, confusion and disillusionment, Crushed Ice's optimistic overtones shine through like the Willy Wonka golden ticket we all need. They have already been submitted for the Nordic Council Literature Prize – an unprecedented first for a musical group.

While one unverified source has coined Nights & Weekends as the best album of 2022, their sound is addictive, uncategorizable and we simply can't stop listening. They have created a genre of music which has yet to be labeled and defined, benchmarked by harmonies, winds, swing and dazzle that makes you simultaneously feel rich and poor. Originally sold as a commissioned NFT to an unspecified buyer for 4.2MM, Nights & Weekends has been released to the public for an unspecified amount of time. Live without dead time: scoop this up now before they pull it from the market and push it back to Blockchain. A true classic!